The iceGuides - mountain guides Matthias Wurzer and Vittorio Messini came up with the idea of implementing this idea in East Tyrol after several ice climbing trips to Canada.

In the shady outlet of the Gschlöß gorge, near the Matrei Tauernhaus (an alpine lodge), they finally found what they were looking for. With the support of the association Bergsport Osttirol, which is now maintaining and running the site, and with the support of the province, the county and the EU, the project was implemented in autumn - winter 2015/2016, and opened with the inaugural Ice Festival in East Tyrol on Jan. 31, 2016. 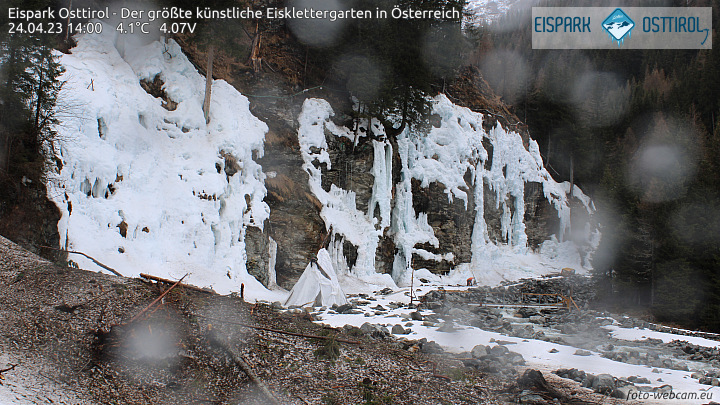 Ice climbing is a fascinating sport that is currently booming.

There is probably hardly any other alpine discipline that is so engaging as picking crampons and ice axes into a vertical wall of frozen ice... in short: ice climbing is just so much fun!

It is a misconception that you have to be a bodybuilder to climb the ice - the basics lie in balance, combined with efficient technique! Beautiful ice climbing does not only feel like a vertical dance, but also looks like it! Our teaching method is not too much talking, but practicing! Climbing technique, safety and a lot of fun are on every programme.

East Tyrol and the Hohe Tauern mountains offer one of the best locations for ice climbing in the Alps! There are not only a variety of long and challenging routes to choose from, but also perfectly equipped routes & areas for beginners - such as the East Tyrol Ice Park, Austria's largest artificial ice climbing park!

The ice climbing season in East Tyrol and the Hohe Tauern mountains is between the end of November and the end of March, depending of course on temperatures and sea level.

Low ice climbing destinations in the main valleys, such as the Iseltal, Pustertal and the Mölltal valley, can usually be climbed from December to the end of February, but in the higher areas, such as Felbertauern, the Brunnalm, Kartitsch or the Rudolfshütte, the "early season ice" can already be climbed at the end of November, and the season lasts until the end of March in some cases.

The Ice Park East Tyrol is usually open between mid December and the beginning of March, see www.eispark-osttirol.at. Since it is the ideal location for courses, the majority of our course programme logically takes place in Austria's largest ice climbing park!

North walls and north wall gullies even show acceptable conditions from October on - depending on temperature and snow conditions. So that you can already get a taste in autumn!

Therefore, our course programme starts with the beginners' courses around mid December, and usually ends at the beginning of March.